Market research - from the individual to the aggregate, Rebel uses a human-centered research methodology to give you a clear picture of your market and the weak-points left open by your competitors. Rebel’s strategic work has had an impact industry-wide in enterprise software, eCommerce, consumer electronics (audio, tv, toys), SmartCity, mobile and health.

Feature-set design - studying behavior to pinpoint need is the key to product success. Forget the competition, knowledge of the customer always succeeds. Rebel’s work in feature-set design is seen across all eCommerce, mobile apps, operating systems, appliances, CRM and banking.

New product discovery - Rebel's 'Innovation Engine' is a deep dive into a particular market to discover something new. We don't take shortcuts here, and we don't call the mundane an 'innovation.' We've been first to discover products in over 40 markets, starting with the first one-page checkout in 1999 to offering a machine-learning algorithm to crypto-banking in 2019.  Your customer wants you to be on the cutting edge, let us get you there.

Market validation and discovery - there are so many markets left untouched or under-utilized. Rebel has led the way in discovering new markets in dozens of fields, from insurance to banking, headphones to SmartCity; manufacturing, gaming, automotive and web marketing. Find where your product fits in the ever-growing competitive landscape. 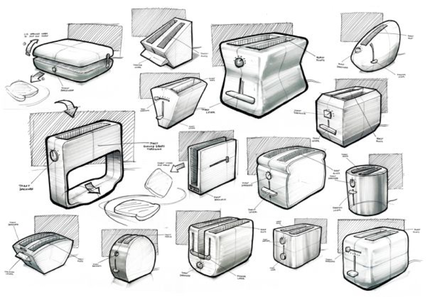 Client: Big-box retailer.
Engagement: create a retro, private label toaster.
Result: While toasters may seem like a no-brainer, this particular toaster became one of the best-selling appliances in the United States.

Process:
Rebel was hired to validate a design done by others. This is fine with us, as product testing is an integral part of our process and key to ensuring the success of any product.

Our first step was to create a matrix of features available in all toasters. We were surprised by the sheer volume of choices in the space. Traditional toasters were losing ground to tabletop toaster-ovens, infra-red heat, and features that users saw as gimmick-y but worthwhile. There are dozens of companies building toasters and toaster-ovens, and each category has products that rate 5-stars across the board.

But we went into people’s homes anyway and studied how they made toast. We got up early, were there when our test subjects woke up, and didn't say a word. Our job in studying behavior is to record actions before we make assumptions about who our customer is or how they are feeling. Going to the trouble of being in people's homes as they woke (not an easy thing) also surprised our client, who had created their new toaster with an old-time design but with a feature-set that rivaled any other product on the market. In the end we were there with over a dozen families as they made toast, using toasters they had bought, and our data showed that the features we were noticing as ‘kitchy’ were indeed just that. In the end, people want to toast their morning bread (or bagel, or waffle, or pop-tart) with a single mechanical lever - the old-school way of making toast. It turns out that consistency is important, reliability is important, and ease-of-use is paramount for people who are still half-asleep.

So while the final form-factor had already been decided, we removed the kitchy features, dials, and buttons except those that were in constant use by our test-market (there were only three). This was a revelatory discovery, and one the manufacturer took to heart as they were slashed their feature-set in favor of simplicity. Sometimes it isn't a particular feature that matters when you're making a mass-produced product, sometimes people just want a consistent piece of toast with their morning routine.

The final result of our toaster research ended up being the best selling toaster in the United States for two years; there is a good chance this toaster is in your home or the home of someone you know.